What the X-Men Teach (Recreational Therapists) About Disabilities and Strengths 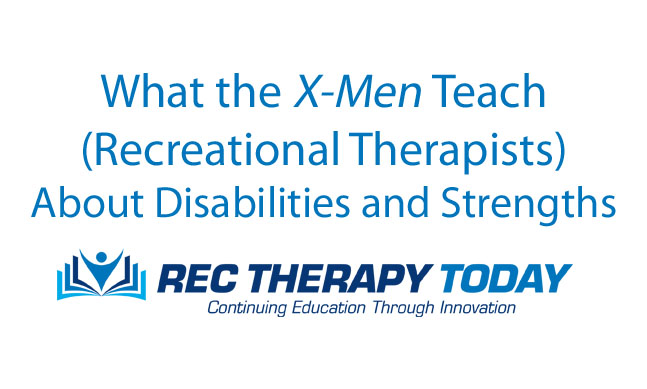 The characters can teach us a lot about disabilities and strengths.

We can see some disabilities, problems, or things that make people unique are visible to everyone.

Here are some X-Men characters with visible differences:

• Nightcrawler is blue.
• Beast is blue (and furry).
• Mystic has blue scaly skin.
• Charles Xavier uses a wheelchair
• Cyclopes has a visor over his eyes.
• Toad is green and he has a giant tongue.

Some people have disabilities (or traumas) that are not always visible to others:

• Magneto’s parents and family were killed during the Holocaust. He misses his family.
• Beast hides the fact that he has hands for feet because he doesn’t want to get made fun of by others.
• Cyclopes has eyes that shoot out deadly laser rays, but these rays are often hidden because he wears a specialized visor over his eyes.
• Wolverine often looks human (unless he unleashes his claws), but his body suffers from being injected and molded with metal (which poisons him).
• Rouge looks human (however she can’t touch anyone or she’ll absorb their life, killing them). It is an Achilles’ heel. She put her first boyfriend in a coma for weeks after kissing him.

Some of the X-Men have strengths and powers that are unique and known to others.

• Mystic doesn’t want to be blue. She wants to look average. She hides her true identify by transforming herself to appear like someone else.
• Beats doesn’t want to be blue with feet for hands. He wants to look average. He uses medication so he can have regular human skin instead of blue fur.
• Charles once used substances to block out the voices he heard from reading minds.

• Bobby (iceman’s) mother asks him, have you tried, “not being a mutant?”
• Fictional Senator Kelly wants mutants to be registered so the public can know who they are and what they are capable of doing.

• Never assume you know everything about a person.
• Validate that a human is real when you are with her (or him) in treatment.
• Realize that some people are slightly suffering inside (hidden) with depression, anxiety, and trauma.
• Some people have disabilities that are visible (and require use of assisted devices like canes, wheelchairs, glasses, artificial limbs, etc.

• Realize some people have strengths that are hidden, like the ability to create art or music or play sports. They may be too humble to brag and tell you what that might be.