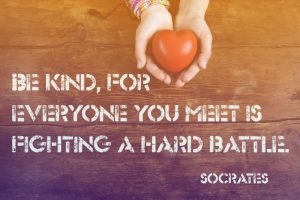 I read in the news that a coffee shop recently fired a barista for allegedly mocking a man who stuttered.

I have several mixed feelings about this incident.

I hope that the barista didn’t do this on purpose. I hope it wasn’t intentional. I don’t know for sure. I wasn’t there.

I feel empathic for the man who was apparently mocked. I’m sure he has heard jokes and been ridiculed before.

I’ll disclose that I have several communication problems myself. Here are four examples;

Fortunately, I’ve made major improvements in all four of those areas listed above thanks to the help of teachers, friends, and speech therapists. Now I facilitate group therapy sessions. I teach webinar training sessions. I’m in charge of teaching orientation for staff at a Psychiatric Residential Treatment Facility. I provide keynote talks on success and achievement.

I don’t think it is funny to mock, ridicule, or joke about any disorder. No human is perfect. Every one of us has problems. I forgive the barista. She isn’t perfect either.

My three best suggestion include: a.) be nice; b.) be easy-going; and c.) keep improving.