The Benefits of Being Likeable vs. the Cons for Being Unlikeable 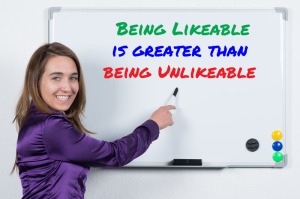 Likeability is one social skill that can be addressed by Recreation Therapists.

Recreation therapists who provide services for people (children, teens, and adults) with behavioral health needs may encounter clients who lack interpersonal skills needed to get along with others, to make healthy relationships and connections, and to keep those relationships.

Education alone won’t cause change. In example: cigarettes have educational warnings on the packages that let people know how dangerous they are and yet people still smoke.

Real authentic changes have to be intrinsic and self-motivated. Outside change (like nagging) and (pestering) won’t do much to encourage a person to change.

Here are two rhetorical questions recreation therapists can propose as the start of a session to get a client (or clients in a group setting) to start contemplating (improving interpersonal skills).

The two questions (listed above) might get people’s attention.

Most people are tuned into Wii FM, which stands for (What’s In It For Me?)

I then suggest: You might want to consider developing interpersonal skills to become more likeable.

Which one wins most of the time? Being likeable or unlikeable?

Write this formula on the dry erase board for the day:

Being Likeable is Greater Than > Being Unlikeable

Example of How Being Likeable Wins

Two politicians in England were running for Prime Minster. Both men wanted to “win” the position of becoming England’s next Prime Minster. One woman was arranged to have dinner with each of them on two consecutive nights. Here is what she had to say about each of them.

Disraeli won the election that year and became the next Prime Minster.

The same is true in most elections. Unlikeable candidates often lose elections to those people who are likeable (charismatic). Think about it for yourself? Who would you want to pick as the winner: a person you like or a person you don’t really care for? I imagine you’ll go with the person you like.

The same is true for anything that requires picking people. Most people pick the person like the over the person who they detest.

Here are some rhetorical questions for group members to consider:

People with “likeable” traits are probably more  likely to get chosen and selected.

The question to ask yourself: do you have “likeable traits?” Do you want to know the secret sauce for being more likeable and winning?

What was Disraeli’s secret sauce to winning the election?

He made people around him to feel important, valued, and even “clever” when they were with him. Whereas, Gladstone did not pay attention towards other people. Gladstone was more focused on himself and his own accomplishments.

So, how can you be likeable? Dale Carngie in his classic, best-selling self-help book, How to Win Friends and Influence Others, said: “You can make more friends in two months by becoming interested in other people than you can in two years by trying to get other peopleinterested in you.”

The Secret to being Likeable is very easy: be interested in other people.

Attention Rec Therapist: Do you want to learn more about people skills?

Sign-up for Interpersonal Success Secrets (self-study course). It is worth 5 clock hours of continuing education. Session content is CE pre-approved by NCTRC.

The course requires reading a book. We also include some helpful resources in the membership area for this course.